Frederick Matthias Alexander was born in Wynyard, Tasmania in 1869 and died in London in 1955. He was a successful Shakespearean actor and reciter who at the height of his career developed vocal and breathing difficulties.

Doctors were unable to help him so Alexander set out to find out if it was something he was doing while reciting that was causing his problem. With patience and an enquiring mind he observed himself with the aid of mirrors.

Alexander discovered that he unconsciously extended his head down onto his neck as he spoke which not only interfered with his vocal and breathing mechanisms but also with balance and co-ordination throughout his organism.

Despite this observation and intellectually understanding his problem, Alexander had great difficulty in stopping his habitual, harmful reaction to the stimulus to speak.Thus began years of patient self-observation and research into habit, stimulus and response.

Alexander eventually solved his vocal and breathing problems and gained remarkable insight into:

A full account of this discovery is outlined in Alexander's third book, The Use of the Self.

Scientific and Medical Recognition
Alexander not only revolutionized our awareness of postural defects and their affect on the organism as a whole, but he also devised a practical and constructive re-education process for dealing with the difficulties which an unsophisticated kinaesthetic sense presents.

In the early 1900's Alexander moved to Sydney and opened the Academy for Voice Studies where he began teaching his method. His practice grew as people realized that his teaching method involved mind/body co-ordination, and made dramatic improvements in breathing, general health and well-being and performance ability.

In 1904, encouraged by a Sydney physician, JWS McKay, Alexander left Australia for London where he set up a successful teaching practice and eventually, a teacher training school. Alexander maintained a teaching practice until a few weeks before his death at the age of 86 years.

On the 24th of May, 1924 a letter to the British Medical Journal was signed by nineteen Doctors who recommended that the teachings of F.M. Alexander be incorporated into medical training:

"We are convinced that Alexander is justified in contending that an unsatisfactory manner of use, by interfering with general functioning, constitutes a predisposing cause of disorder and disease, and that diagnosis of a patients troubles must remain incomplete unless the medical doctor when making the diagnosis takes into account the influence of use upon functioning."

More recently, in September, 2002 a special study module in the Alexander Technique was introduced at St George's Hospital Medical School, London for 3rd year students as part of their curriculum. The account of this very successful initiative is outlined in the "Prince of Wales's Foundation for Integrated Health (2003), Setting the Agenda for the Future, London".

In August 2008 the British Medical Journal published results of an extensive trial that reported long-term benefits of Alexander lessons for people with recurrent and chronic back pain. 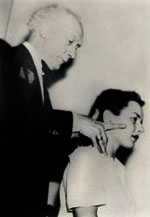